Distrokid vs. Spinnup: Which One Should You Pick?

In these modern times we live in, it seems we have as many choices to make in regards to what platform is best, which search engine has the cleanest interface, which app is the most user-friendly, as we do what clothes to wear in the morning!

For years artists who have flocked to the internet, desiring that coveted viral YouTube video or the by-chance Spotify discovery have been forced to become entrepreneurs too, or risk being left behind. Today, we’re going to look at two different online platforms that are doing nothing short of changing the whole game when it comes to music self-publishing.

Not only by allowing creators to reap 100% of the earnings from their own music, but by creating a sense of online community for these aspiring go-getters and finally providing the service they and we have all really been looking for. These two platforms are truly forcing a gargantuan shift in both how labels find their artists and what kind of pre-existing industry knowledge the artists bring with them.

Table of Contents show
Distrokid
Spinnup
Criteria
Round 1: Value
Round 2: Reach
Round 3: Unique Features
The Decision Distrokid is an online music distribution service for aspiring and seasoned musicians to use to get their music to the places where it will get noticed; this includes top streaming platforms such as Spotify, Apple Music, and Amazon — and this is just to name a few!

Distrokid allows users to upload unlimited self-made tunes for the low annual price of $19.99; this is approximately half the price of uploading just one album on other similar platforms! Distrokid has access to 250,000+ artists who use the service to further their own careers, and it has also been commended online by major media platforms such as Digital Music News, Performer Magazine, and even Forbes.

All earnings are kept by you, the artists, and the options are virtually endless in terms of what can come out of one’s own musical passion on Distrokid.

Check the Price of Distrokid (7% OFF for Our Readers) BUT – there’s a serious competitor, and it’s called Spinnup. Spinnup has access to a lot of the same leading music platforms as Distrokid; Spotify, Apple Music, Pandora, and more. Not only that, but payouts of 100% of one’s music earnings directly to PayPal make Spinnup a hardy competitor in the online music self-publishing race.

With a status as being part of the Universal Music Group itself, Spinnup offers the kind of close-to-industry contact and thus visibility and exposure to record labels that all up-and-coming artists dream of having. Spinnup also offers worldwide digital music distribution to round out its music industry connectedness, and it’s then clear why it’s able to stand toe-to-toe with Distrokid.

In order to give each of these platforms a fighting chance, let’s evaluate this round-by-round according to 3 different criteria:

Without further ado, let’s get to it.

Everyone likes a good deal, and Distrokid is known for its economical ways. For a fee of only $19.99USD users have the ability to upload – as mentioned above – unlimited amounts of self-made tunes. This fee covers the music upload and digital distribution done by Distrokid – which, by the way, is distributed at a speed that is 10-20x faster than any other similar platform!

Performer Magazine even called Distrokid, “A million dollar record label for $20 with Distrokid.” In addition to the ability to earn 100% of the royalties without Distrokid ever taking an unfair cut, users are also even able to get paid when other YouTube creators use their music. These costs cover global distribution – in as little as a calendar day – including the top tracks being sent directly to talent scouts for labels themselves! With these facts and considerations in mind, a winner for Round 1 can be selected.

In summary, both platforms offer competitive pricing and the ability to collect 100% of one’s earnings — compared to the 10-15% that artists working with labels usually net off of their work, it’s safe to say both Distrokid and Spinnup are doing value right. But, there can only be one winner… Round 1 Winner → Distrokid

Nothing breeds success quite like publicity these days, and there’s something that can be said for celebrity endorsements, too. What kind of celebrities are aspiring artists really concerned about, though? That’s right; record labels.

On Spinnup, the opportunities to be seen by major record labels such as Universal (which Spinnup itself is a part of!), build one’s social media following on a variety of platforms (Instagram, Facebook, YouTube, and Twitter) directly from a Spinnup user account, and build a repertoire with a growing fan base are right at the user’s fingertips.

Spinnup also constantly browses artist collections and charts on its own platform, and promotes the songs that they really love! The abilities to both reach such a wide, industry-oriented audience and generate international fan interaction are key points in this round on “Reach”.

Can Distrokid hold up its end? With celebrity endorsements such as Ludacris and 21 Savage, and a strongly comparable ability to reach a wide fan base, Distrokid doesn’t back down easily.

As mentioned above, the ability to get artists/users’ music into massive streaming platforms such as Apple Music, Spotify, Tidal, Pandora, and iHeartRadio are just the tip of the iceberg; an active community of 250,000+ fellow artists and countless other purchasing outlets round out Distrokid’s impressive offerings.

Quantifying popularity and the ability to give rise to popularity is a tough one, but there is a singular big difference here that gives this round’s winner its edge: visibility to industry professionals. As such, our winner is… Round 2 Winner → Spinnup What better way to a tiebreak, than to get down to the nitty-gritty? In such a close race, it seems like the only way to settle things for good is to look at the qualities that have the ability to set these platforms apart. They are the selling points, the deal-closers, the up-sellers; for our purposes, we’ll call them the unique features.

Its user-friendly build means the interface is still simple to navigate, despite also offering the ability to do cross-platform work such as managing one’s Apple Music page. Distrokid provides music industry rookies and veterans alike with a compilation of all of the critical aspects required to distribute, make money on, and grow oneself own music and public musical personality.

So what does Spinnup have to offer? Valuable insights such as streaming data from multiple sites – Apple Music, Spotify, Deezer, Google Play, etc… – and Spinnup-provided, unique promotional links for artists’ own songs characterize the kind of user-focused abilities Spinnup provides.

A useful blog and video tutorials also round out Spinnup’s feature arsenal and add to its pre-existing accessible design and user-friendliness. Both Distrokid and Spinnup provide the epitome of valuable services for their users and they certainly don’t fall short on the extra value either.

Among other things, clean, easy-to-understand dashboards that provide aggregate social media monitoring and critical information on existing music performance are what set both Distrokid and Spinnup apart from other music distribution platforms. However, only one winner for this round can be selected, and that winner is… Round 3 Winner → Distrokid 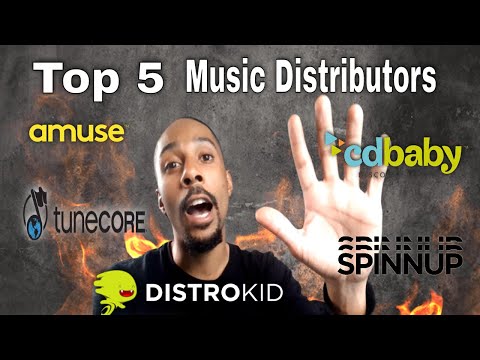 How long do people usually wait in order to truly realize their career dreams? With services like Distrokid and Spinnup, the music industry’s barriers to entry are lower than they have ever been historically. The processes of uploading, distribution, exposure, and getting paid are not just more clear-cut, but safer, and more profitable.

It’s then a no-brainer why hundreds of thousands worldwide have already hopped in and begun creating, and you could be next in line. Similarities between Distrokid and Spinnup such as users making 100% profit on their music and unrivalled speedy distribution to the world’s top music streaming platforms are clear, but it’s the differences in price, overall capabilities, and public reviews that mark the minute-yet-important variations in what’s being offered.

So what’s the next best step? With all of the above information in mind, I believe it’s time to hear our verdict. For its unbeatable bang-for-your-buck value, competitive reach, public endorsement and subsequent promotion from both celebrities and popular media alike, in addition to unique features found on no other platform in such an organized and effective way, Distrokid is our overall winner. When it comes to independent artists getting their music on streaming platforms like Spotify, Apple Music, and Amazon, working with a digital music distributor is…

For many new and existing artists, producers, and content creators, distributing music yourself is becoming more and more viable thanks to a number of online/mobile… The world of music is changing rapidly as both our technology and tastes evolve. The digital world is making it easier for independent artists to…