It wasn’t that long ago when I would get excited about downloading my favorite band’s newest album from the iTunes Store.

It also wasn’t too long before then that I would order physical CDs from Amazon and have them shipped to my house. And while we’re at it, I remember shortly before then looking forward to heading to the F.Y.E. at my local mall or to the music section at Target or Best Buy on the weekends to pick up a copy of my favorite band’s newest CD!

Indeed, some of my fondest memories are about getting home from school, heading to my room, powering up my stereo system, popping a CD into my CD player, and jamming to my favorite tunes.

But times have changed, and they’ve changed fast. Gone (for the most part) are the days of buying physical CDs. The music industry reports that it shipped under 50 million physical CDs in 2019, down from nearly 1 billion CDs shipped in the year 2000. Apple even went so far as to shut down the iTunes Store, effectively ending the days of paying to download MP3s, as well. Instead, people have turned to various streaming services to listen to their favorite music.

Streaming has taken the industry by storm, and there’s no indication that it’s slowing down. If anything, it’s speeding up, with more and more players getting into the streaming game each year. Most of the major tech companies offer music streaming services, with options available from Apple, Google, and Amazon. Pandora, too—one of the original music streaming sites—is still around, although it operates a little differently from the other streaming services in that it doesn’t allow users to pick and choose individual songs to listen to. And of course, Spotify offers one of the most popular streaming apps around.

This leaves consumers with plenty of options to access their favorite music from virtually anywhere. But what about the artists? If people are no longer buying CDs or paying per song or per album to download music from iTunes, how do the artists make money? Artists, of course, make money from touring, but before streaming, selling records was another substantial source of income. Now, though, that income stream (no pun intended) has all but dried up.

This leaves us to wonder whether revenue from streams of individual songs makes up for the revenue lost from declining record sales. Well, this article takes a look at just how much Apple Music pays artists per stream. So, if you’ve ever wondered how much money your favorite artists make from fans streaming their music, keep reading to gain a little insight into this often-overlooked piece of the music industry.

This article focuses only on Apple’s streaming service, Apple Music. For insight into the other streaming services and how much each one pays artists per stream, be sure to check back later. Just in case you’ve been living under a rock for the last 5 or 6 years and are unfamiliar with music streaming, here’s the basic concept: instead of paying per song or per album to download an MP3 of the track onto your device (think iPod or iPhone), you pay a set monthly subscription fee and, in return, gain access to the service’s entire library of music.

For Apple, this means users pay $10 per month for access to every single song in the iTunes library. Yes, you read that right. For just $10 per month, you can listen to any of the 45 million songs in the iTunes library as many times as you like. All you need is an Internet connection. Instead of downloading each track, you just select a song and it plays directly from the Internet on your device. This is what we mean by “streaming.” But don’t worry, if you still prefer to download your music, Apple Music allows you to download songs and albums, too, so you can listen to your music if your iPhone is in Airplane Mode or otherwise disconnected from the Internet.

Apple Music launched in 2015. Boasting approximately 60 million subscribers, Apple Music continues to grow its market share, although it still lags behind Spotify in total users. Still, 60 million users are nothing to write off. That’s a lot of people listening to music and an enormous number of potential fans with access to an artist’s music at the touch of a screen. 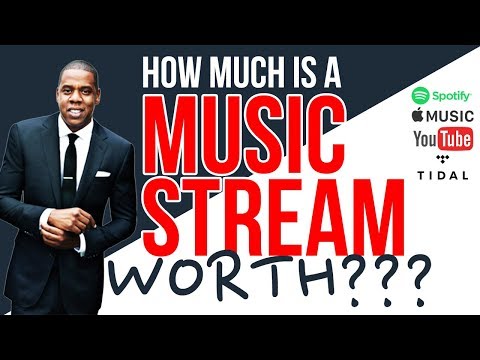 Music streaming grew from a relatively minor portion of total music-industry revenue to a main source of revenue in a very short amount of time. Indeed, one estimate puts the proportion of total revenue that streaming generates for the music industry at 80%. In just five years, streaming revenue experienced a nearly-500% increase, growing from $1.8 billion in 2015 to a whopping $8.8 billion through 2019. But how much of this money passes through to the artists? The answer is not much.

Streaming services have been criticized from the beginning for the relatively small royalty payments they make to individual artists. But just what kind of numbers are we talking about? Successful artists, who amass billions of streams each year, of course, can still earn substantial income from streaming. Taylor Swift’s songs, for example, generated approximately $400,000 in a single week across all streaming platforms. But for smaller artists, the numbers aren’t so great. Even an artist with, let’s, say 10 million streams in a year is unlikely able to live on streaming revenue alone. Alright, enough about the music industry and streaming in general. It’s time to get down to what you all are here to learn. Just how much does Apple Music pay artists per stream?

It’s important to first note that the rates Apple Music pay artists vary. But one artist, the cellist Zoë Keating, publishes the breakdown of her earnings from the various streaming services each year. For the year 2019, Keating reported Apple Music paid her $0.012 per stream. That’s 1.2¢ per stream. This is consistent with 9to5mac’s report that Apple Music pays between $12 and $15 per 1000 streams (i.e., 1.2¢ to 1.5¢ per stream).

So, let’s say an artist’s songs were streamed a total of 20 million times on Apple Music in one year, and that artists receive the same 1.2¢ per stream rate as Keating.

You may think, $24,000, alright, not bad for not having to do anything (other than, of course, writing, recording, engineering, producing, and distributing the tracks, and paying your manager, co-writers, and studio musicians). But $24,000 in a year pales in comparison to Taylor Swift’s $400,000 in a single week.

And 20 million is a lot of streams. Many artists don’t come close to that number. Each year around the end of December, I enjoy seeing the artists I follow on Instagram post their Spotify Years-in-Review. This feature tells the artist how many times their songs were streamed that year. I distinctly remember one of my favorite artists, whom I listen to on repeat for literally hours at a time, posted about 1,000,000 streams in 2019.

So, let’s do that math and let’s assume they receive the same 1.2¢ per stream from Apple Music that Zoë Keating did.

$1200. That’s it for an entire year, for the entire band. I’d bet $1200 isn’t enough to pay the rent on the lead singer’s apartment, not to mention pay any meaningful sum to the other 4 band members.

And that’s assuming the artist receives 1.2¢ per song. But many artists aren’t so fortunate. Remember, Keating’s 1.2¢ per stream is an average, which necessarily means some artists receive less.

So there you have it. While it may seem like musicians have it made as soon as their songs hit Apple Music and people start listening, the reality is much different. At rates of just 1.2¢ to 1.5¢ per stream, simply achieving a few million streams will generate nowhere near enough revenue for the artist to live on, much less to live on lavishly. Instead, only those massively successful artists, who achieve billions of streams, are likely to make any serious money off streaming alone.

You can see a full report on the revenue generated by streaming services from the Recording Industry of American here. Since the beginning, streaming services and artists have butted heads over fair payouts. Streaming services, understandably, want to keep as much of the revenue they generate from users’ monthly subscription fees as possible. But artists, too, deserve to be paid fairly for their work, and there’s something to be said for the argument that streaming services, and their billions in annual revenue, would not, and indeed could not, exist without the artists whose music serves as the foundation for the entire industry.

In 2018, the United States Congress passed the Music Modernization Act, and it was subsequently signed into law. Without getting into too much detail, the MMA modernizes copyright laws in the United States in an attempt to ensure artists receive a fairer share of the streaming revenue they help generate. CNBC reports the MMA, “allocates royalties to music producers, updates licensing rules for streaming to make sure rights holders are paid in a more efficient fashion, and ensures that artists receive royalties on songs that were recorded before 1972.” CNBC also reports the MMA creates a new body, called the Music Licensing Collective, that is charged with collecting and distributing royalties beginning in 2021.

Streaming looks like it’s here to stay, at least for the near future. We hope you’ve found this post helpful and enlightening. While you may be disappointed to find out just how much (or little) money your favorite artists receive from streaming, the industry appears to be making adjustments to ensure artists are paid fairly so they keep producing the music we love to listen to.

If you enjoyed this article, be sure to check back soon for more! 1 thought on “How Much Does Apple Music Really Pay per Stream?”

previousHow Much Does Spotify Pay Artists Per Stream?
nextBeatstars Review: Worth It to Sell Your Beats?