Spotify has made a name for itself as one of the world’s top audio streaming services. People can stream music from Spotify for free, or they can spend a small price each month for ad-free streaming. The system is also available on multiple devices.

But one question to note involves how much money people who place their music on Spotify can get off of the service. People are not buying their tracks or albums directly, but instead are streaming individual songs or albums through the Spotify platform.

So, how much does Spotify pay per stream? Let’s look at some of the intricacies surrounding Spotify and how artists earn money. These totals can be high, but they might also be concerning to some people.

To understand the value of Spotify, it helps to look at what it provides. Spotify is a service that allows people to stream music from various artists from the past and present. Spotify works on multiple devices, including mobile phones and tablets. People can even use Spotify in a car, on a smart TV set, or a PlayStation or Xbox video game console.

The platform has been trendy over the years. Estimates suggest that more than 250 million people throughout the world use Spotify each month. About 125 million of those users pay for premium subscriptions. There’s no particular set value for how much an artist will earn for each Spotify stream. A pro-rata approach works when paying out artists and others associated with the music. Soundcharts reports that Spotify and most other streaming services use this model for distributing royalties.

The pro-rata effort entails a few steps for figuring out what people can receive:

This point has become a criticism of Spotify and other streaming services. While Drake or Billie Eilish will earn thousands from Spotify each year, a smaller artist that doesn’t get as much exposure will not receive as much. Still, a newer artist who is looking to gain exposure can earn money off of Spotify streams, but it would take an extra bit of effort to make one’s work more noticeable. 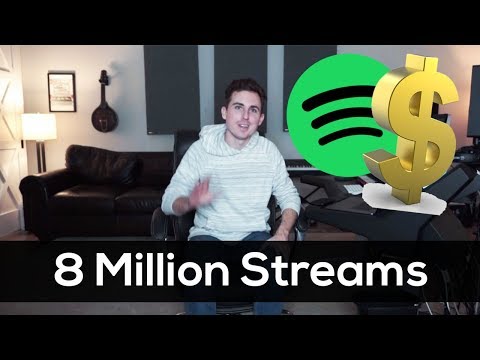 The most noteworthy part of Spotify is that while the pro-rata approach works for how much artists earn, that doesn’t mean there’s a set value for what they will get for each stream. The specific money per stream varies by source: For the Sake of Comparison

While the totals artists get from Spotify might seem minimal, it does help to compare that total with what others offer. Soundcharts says that Spotify is right in the middle when it comes to how much people will earn off of streaming services. Soundcharts calculated the totals that were recorded by multiple sources and found that Spotify artists on average receive more per stream than what they’d get off of Pandora, YouTube, UMA, or Yandex.

There are plenty of streaming sources that pay more money. Amazon Music Unlimited pays $0.01196 per stream, while Tidal pays $0.00989 per stream. But those services aren’t as popular as Spotify, not to mention they don’t have as much to stream as what Spotify offers.

How Artists Get Their Money

The streaming nature of Spotify makes it to where people will listen to music without buying anything. Think of it as something where people can temporarily loan the music out to listen. The subscriber doesn’t own the music, but that person has the option to listen to it as often as one wishes.

There are three points for how payments come out from Spotify:

Where the Money Comes From

The money will come from two critical sources. First, there is the ad revenue that Spotify collects. People who use Spotify for free will have to listen to or see various advertisements in between songs. One other point about what artists get comes from how many people will have to share the royalties they get off of Spotify. The actual artist might not get all the funds one is hoping to earn.

The Planetary Group states that the streaming payouts from Spotify and other services are divided up between many people. These include:

In short, the artist will have to share all those royalties with other people. The artist’s total royalties won’t be as high unless that artist releases the music on one’s own or doesn’t hire other parties to assist in the writing effort.

An Issue Among Many

Many artists have been heavily critical of Spotify over the years. Much of this comes from how those artists aren’t earning as much money as they wish. The greatest concern from artists is that Spotify is not issuing enough of its revenue to the artists and rights holders. The people who work for Spotify get much of the money, while the people who supply Spotify with the music that makes it run get hardly anything. The issue is compounded further by how streaming services are cutting into album and track sales.

DJ Mag states that Spotify earned $7.44 billion in revenue in 2019. But as TechCrunch also reports, Spotify only gives 70 percent of its revenue to artists and music companies for royalties. The disparity makes it to where Spotify’s employees will receive immense amounts of money while the artists don’t get much.

Spotify has to cover substantial operating expenses. The Verge writes that Spotify has only turned a quarterly profit a few times in its existence. The third quarter operating profit in 2019 was worth about $60 million. But there are concerns among some artists over how much money Spotify spends on keeping its operations up, not to mention how people who are more popular have a better chance of earning money.

These points have caused many artists to refuse to make their music available to Spotify. Taylor Swift and Thom Yorke both removed their music from Spotify in protest over how artists earn money, but they have since put their music back on the platform.

People can get paid a good deal of money off of Spotify, but the way how the money goes around should be noted.

The money that an artist will earn is minimal, but it can rise if someone gets more streams. But the total amount that people receive could be a concern, especially considering how much money Spotify earns.

But Spotify does provide more money per stream than some other options, but even that could be an issue when the money Spotify regularly brings in, and its expenses for work come into play. previousAmuse Review: What You Should Know Before Signing Up
nextHow Much Does Apple Music Really Pay per Stream?