What is Music Distribution and Do You Need It? Obviously, it is the distribution of music by various artists, but there is more to it than that. It is the process that the music industry uses to make music available to fans of the artist in music consumers in general after they have recorded it.

It’s part of the overall business plan for musical artists everywhere to be able to sell their music in a variety of formats to as many people as possible.

Music distribution allows customers to purchase the music they are interested in in the form of CDs at physical brick-and-mortar music stores, as well as being able to download it or even stream it online while using their phone, laptop, tablet, or any other electronic device.

Due to the rise and growth of the Internet, the ways that music is distributed from the artist to the consumers have changed drastically over the past few decades.

From the 1950s through the 1980s, teenagers everywhere were excited to go purchase their first record album.

Having a collection of vinyl albums of their favorite musical artists was the epitome of fun and entertainment when it came to listening to the music they enjoyed.

There were also eight-track tapes and eventually cassette tapes that people used to record and play the music they love.

Artists were able to sell their music on these cassette tapes in eight truck tapes along with their albums, which made them, and their record companies and producers, a boatload of money.

Many teenagers would sit by the radio every Sunday night during the weekly music countdown so they could record their favorite songs on a tape recorder using a cassette. They could then play it on their boombox or in their vehicle on their car stereo.

In the 80s and early 90s, this all started to change to CDs played on CD players instead. It was after we hit the new Millennium that music began to be available through a variety of online streaming sites and MP3 players.

In today’s world, artists put out music videos on sites such as Venmo and YouTube for their fans to listen to while they still make money from their music so they can make a living. 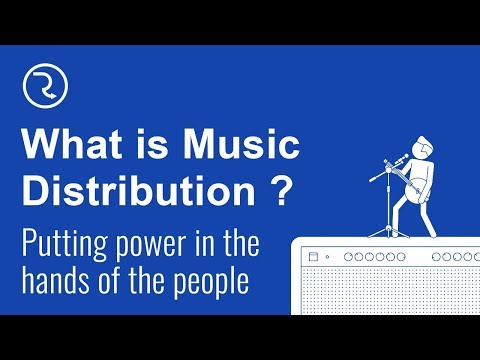 The Mechanics of Music Distribution

The bottom line is that music distribution makes it possible for the public to have access to recorded music from their favorite artists, but there is a lot that goes into producing and selling the music before it gets to consumers.

There are many players involved in this game of music distribution, including engineers, record labels, producers, agents, and even promoters and publicists.

They all play an important role in getting the music ready to go to the distributors so that consumers can purchase their favorite music.

Back in the 20th century, most music distribution companies were the main link between the record labels and producers and retail outlets where the music is sold.

This included music stores as well as big-box retailers like Target and Best Buy, book stores, and even places like Recordland and other mainstream record stores.

Basically, music distributors were wholesalers of the music that artists created and record producers released into the mainstream.

Each record label was in charge of writing up the contracts between the label and the musical artist. The people who worked at the record label would also market the artists’ music as well as promote it after they helped them to be able to record the music in their sound studios. Most music consumers back then purchased their music on vinyl records, cassette tapes, eight-track tapes, or, eventually, CDs.

Most of the time, it was the record label that paid to have these types of products manufactured and then distributed to the retail outlets.

It was the distribution companies that were in charge of brokering the deal between the two companies and getting the music into the hands of the fans and consumers who wanted to purchase it and enjoy it.

The Changes in Music Distribution

Over the past several decades, the way music is distributed has changed tremendously, especially at the beginning of the 21st century.

Many people had taken to the various internet sites to be able to download the music they love, for free.

This was because pirated music was all the rage and no one was really doing anything about it. This process was costing artists, as well as their labels and the original music distributors, tons of money in profits.

One of the main pirating companies was Napster but with the crackdowns came rules and regulations.

In today’s world, music lovers can still download their music online but have to pay for it through online outlets, such as Amazon and iTunes.

There are also subscription services that are available, including Spotify and Pandora, for which people can pay a monthly subscription fee and download a certain amount of songs each month.

Although the amount of money being spent on physical musical products has declined over the past few decades, vinyl record sales are actually hanging in there. According to the Recording Industry Association of America, vinyl records have actually sold the most units in the United States since 1989.

Hundreds of music distributors have gone out of business over the past few years, but the ones that have contracts with major music labels are still going strong.

These include record labels, such as the Universal Music Group, Sony Music, and Warner.

Much like independent authors and self-publishers of books, many artists have taken to recording their own music and then distributing it themselves after producing it at an in-home style business.

They have way more creative control over their work and can even gather up fans and get people excited about their music ahead of time by utilizing TikTok, YouTube, and other social media platforms.

This has changed the way music is produced, purchased, shared, and received and only time will tell how it all ends up for the old-school record labels and music producers.

Much like Amazon and Barnes and Noble Press are important to authors to get their books published and into the hands of readers, digital music aggregators, such as CD Baby, TuneCore, and DistroKid are companies that many musical artists use to produce their music and provide it to the masses.

These digital music aggregators are available for artists to use to get their music onto the major platforms where most people purchase their music from, including Amazon as well as iTunes, Apple Music, Tidal, Spotify, and several others. This has changed the entire landscape of how the music industry currently operates and has opened many doors for musical artists throughout the world and provided them with opportunities to produce their music that they may not have had in the past.

These companies now provide almost all of the music distribution, outranking all other ways that artists can use to make their music available to the public.

Music has been around for centuries and will be with us for many more as it gets us through hard times and helps us to celebrate the good times.