What Is a UPC/EAN Code & How Do I Get One for Music? When my husband decided to start releasing his music, we realized just how much there was to learn about the process.

Making music is only one piece of the puzzle – getting it out there and getting paid is a different puzzle entirely.

Among the many other things there were to research and piece together, understanding the importance of UPC codes and how to obtain them became an important task.

As we don’t want you to have the same struggles, this guide is designed to answer the same questions we – along with many other musicians – have regarding UPC codes.

Table of Contents show
Short Answer
What Is a UPC/EAN Code and Do I Really Need One for My Music?
How Do I Get a UPC/EAN?
Do I Need a Separate UPC for Each Track I Release?
What’s the Difference Between a UPC/EAN and an ISRC?

A UPC or EAN number is the code used to track the sales of a product – including music albums.

There are two basic methods for getting a UPC or EAN. These include through a music distributor or purchasing one yourself. 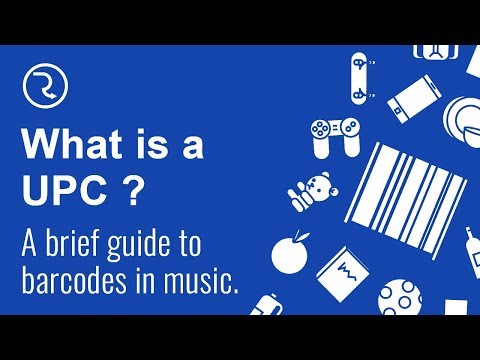 What Is a UPC/EAN Code and Do I Really Need One for My Music?

Let’s start with some simple questions: What exactly is a UPC or EAN? Why are they important? And do you really need one?

UPC stands for Universal Product Code. You’ve seen them plenty in your life – every time you go to the grocery store for your regular items.

On physical items, they are represented by a bar code to track sales.

When you purchase milk, for example, that code gets scanned to tell the computer system what you’re buying and how much it costs.

All of that information is then used by the grocer to know what items are being sold and what needs to be reordered to stock the shelves.

If you want to get paid for your music, there has to be a way to track when it’s sold. The UPC tells retailers whose music was bought so that they know who to distribute money to.

Most streaming services, including iTunes, will not let you put your music on their platform without a UPC.

EAN stands for European Article Number. The EAN is basically the same thing as the UPC number except it’s just distributed in the UK.

Another difference is that a UPC is made up of 12 digits while an EAN has 13.

Both the UPC and EAN are globally recognized. Which one you need just depends on where exactly the music is being sold. For most people, the simplest way is to work with a music distributor.

In addition to many other benefits, a music distributor will provide free or deeply discounted UPCs for the music you release in relation to their services.

For example, Ditto and RouteNote give free UPCs. Choosing such a route can save musicians a great deal of money.

However, there is a common concern that the musician doesn’t own those UPCs. In other words, the question is often whether those UPCs are still valid if they choose to stop working with that distributor.

This isn’t a question that has a general answer. You see, businesses purchase UPC/EAN codes in bulk and assign them to items they are selling.

And – depending on where they bought them from – they might have to pay annual renewal fees.

Technically, you can find your UPC number with your current distributor and file that with the new one.

However, if you’re not paying for that distribution service membership anymore, they might not continue to pay those annual renewal fees.

In other words, this can be a sticky and tricky situation. And as such, many musicians are concerned about relying on the UPC/EAN codes provided by the distributors.

The good news is that you don’t have to. You can purchase your own UPCs via a few different routes. The most recommended one is GS1 US. This particular avenue requires a pretty hefty investment, though.

It’s cheaper if you’re buying UPCs in bulk. And that particular fact usually makes it a better option for businesses than individual artists.

Many artists have discovered more budget-friendly options. Platforms like Single UPC, UPCs.com, and Bar Codes Talk typically sell as little as one UPC at a much more affordable option.

However, as you shop for a UPC, you have to read the fine print.

GS1 US may be more expensive, but it’s also completely legitimate and lists you as the manufacturer. And artists tend to have no trouble using them on any platform.

Other options, however, can be different. They are typically just reselling UPC numbers, which isn’t necessarily a bad thing.

However, some customers have trouble getting those to work on some platforms. Additionally, as they are being resold, you might not be listed as the manufacturer.

And as with any investment, it’s important to do your research and look at reviews for any site you’re thinking about buying a UPC number from.

Do I Need a Separate UPC for Each Track I Release? It really depends on how you’re releasing these tracks.

Think about buying something you regularly purchase at your local retailer, like shampoo.

Typically, you have several ways to buy the same shampoo: a small bottle, a larger bottle, one with a pump, a travel-size bottle, and usually as a set with the conditioner.

Each of these options has its own code so that it rings up properly at the checkout.

The same goes for music. If you’re going to release 10 or 12 tracks as an album, then you would only need one UPC/EAN for the entire collection.

And if you’re going to sell that album in the digital space, you’ll need an ISRC for each individual track – which we’ll get to below.

If – on the other hand – you decide to release all 10 or 12 tracks as singles, they’ll each need their own code.

What’s the Difference Between a UPC/EAN and an ISRC?

You know now that a UPC or EAN is the identifying code for your collection of music.

Usually, this is an album with several songs, but it could be a single if you choose to release it that way. So the UPC is the code for the bundle, basically.

Now the ISRC number – or International Standard Recording Code – is assigned to each individual track on the album. Even singles need an ISRC number. Just like the UPC or EAN, a music distributor will typically assign an ISRC to your tracks. However, you can purchase your own so that you can sell your music yourself or use them on the distributor’s site.

If you want to purchase your own, you can do this for a one-time fee at the US ISRC Agency’s website. previousWhat Is an ISRC Code & How Do I Get One for Music?
nextWhat Is iTunes Match and Do You Need It?