Over the years, people on the internet have been discovering really good ways to earn money. Online advertisements, blogs, YouTube channels, and even social media platforms are now being used to generate income for internet-savvy individuals, popularly known today as “netizens”.

These channels have allowed creative individuals to pursue their craft while earning good money; something which has not been feasible in older generations.

Table of Contents show
What is Distrokid?
The Red, Yellow, and Green Dot
Issues with the Yellow Dot
Possible Solutions
Conclusion One of the emerging platforms for internet-based earning is Distrokid. Distrokid allows its users to upload their own music into popular music streaming platforms like Spotify or iTunes. Distrokid is quite popular because it pays the music developers 100% of the fees, while only taking fixed periodic subscription fees from them.

The value of Distrokid is that it enables the public to access the upload function on popular music sites which may not be available for everyone. Music creators often prefer these channels to upload their music instead of free streaming sites like YouTube because the content in Distrokid’s partners are usually paid for.

This means that the subscribers on music streaming platforms like Spotify or iTunes are considered serious in listening to music and are quite rounded in listening to newer genres because of their willingness to pay for good content.

The Red, Yellow, and Green Dot

When it comes to music, copyright claims often create problems for producers and distributors. As a major platform, Distrokid cannot afford to lose credibility by releasing content which would be subjected to copyright claims. They have a long review process which would run for at least two weeks and would last about a month at most.

During the review process, there will be a yellow dot on the content uploaded by the creator, indicating that the review is ongoing. If the content is to be rejected, a red dot will be seen beside the content.

In most instances, the reasons for rejection will be given to let the creator make necessary changes. A green light on the content means that they have approved the content for uploading and would reflect the payment to the user’s balance.

This review process is not often made known to the creators. In some reviews, some users are unable to figure out why they cannot upload their music quickly. This yields bad reviews on Distrokid.

During the review process, they are embedding certain track marks on the albums to protect them from being copied on mainstream sites like YouTube and Facebook. If there are earnings from these imitated content, the Distrokid user will be able to share if such revenues are infringing on the original content of the user. This is quite unknown to most users who did not read the brochures upon signing up.

Issues with the Yellow Dot

As is the case with every business, having a faster stream of revenues allows a content producer to earn more over time. If a revenue stream slows down, so does the money-earning process. Most users are taking issues with the yellow dot status because it apparently stalls their earnings.

Negative reviews have been given to the website as this issue has been a consistent complaint among some users. A better explanation of the yellow dot status must be given in order for the users to understand deeper the intention behind the tedious review process.

If I was a content creator for a music streaming site, an imitation of my original content would entail lost revenues for me. As such, it would be beneficial to have my works protected by Distrokid instead of having to share advertisements and viewers with another user who imitated my work.

The yellow dot status is not that clear to all users. The discontent has led some to leave the site and look for alternatives in the industry. A solution to this is actively posting on the FAQ’s site to let the users know of the protocols surrounding the yellow dot sign.

This would help increase the satisfaction of the users with regard to the platform. This is because they would grasp the purpose of the delays, and would be able to understand the benefits that come with the waiting time.

Now that the yellow dot issue has been established, it would be prudent to ask which factors influence the waiting time. One of the main factors of influence is reputation. content users with no previous record of infringing copyrights are more likely to go through an easier evaluation since the system already trusts that user.

Another factor is the length of the song or album being published. If the length of an album or a piece is quite long, it may require more time to review. In some cases, to avoid bottlenecks, these long contents would be placed in lesser priority piles to make sure that the review process moves along.

However, the delays usually don’t go beyond one month. The frequency of uploads is also a factor of influence. If a content user regularly publishes content once a month, the reviewers most likely would have a spot on their daily activities for them.

A consistent wave of content would allow reviewers to anticipate the time at which a content creator would upload their creations. This way, they are able to launch their albums early on. Whether some users like it or not, they would be tackling the same problems as they continue to use Distrokid. One of the main problems for podcasters is that they sometimes fail to deliver content on time to their listeners because of the yellow dot status which takes long. More often than not, breaking these commitments sends a bad message on a marketing standpoint.

While the site does not have rules regarding the timing and volume of uploads for their users because they want to be a flexible platform, one could alter the timing at which he/she uploads music into the platform so the content would be able to reach the listeners in a timely manner. For instance, a creator who releases remix albums for his/her listeners on a monthly basis may find it beneficial to plan 1 month ahead.

The content for the June issue should be already awaiting approval on the platform by April. This way, the content creator would have more than enough time to wait for the approval process.

This is ideal for those who upload music full-time as a livelihood. This way, they would be able to enjoy a stable revenue source without having to suffer from the delays brought about by the review process.

Another solution is to try an arbitrary pattern of uploading. There are content creators who create content depending on whims or flashes of creativity. These are usually done by people who only seek self-expression or part-time income.

In these cases, it may not be feasible to organize one’s content creation schedule. It would be more practical to follow one’s whims in this case. This way, one would not risk losing their audiences just because the content cannot be uploaded at a scheduled time.

Most people suggest moving on from Distrokid and simply find another medium of exchange for their craft. While exploring is a good idea, Distrokid’s processes are quite impressive. The level of care being given to each submission highlights their integrity as a business.

If a content creator is looking at the business side of things, a fixed periodic payment with a guaranteed 100% of the income coming straight to one’s pockets is not a bad deal. Their review process also increases the value of the contents being submitted because these are being separated from the rest of the existing music to date. This would protect the reputation of the musician in the long-run. 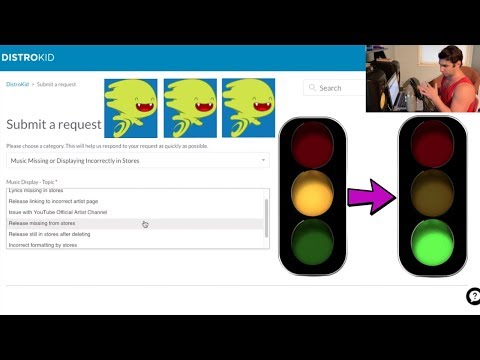 The yellow dot status has been considered an inconvenience by many using Distrokid. While the impediment of one’s revenue stream is quite a difficult situation, Distrokid’s policies are able to create an environment with integrity among content creators. This increases the value of the content in the long run.

As such, the website’s system is a highly recommended platform for selling music-based content online. While its flaws have not been fixed so far, it would be far more profitable to take advantage of opportunities in times of disadvantages. Adapting to the situation at hand is probably for the best, to avoid wasting resources and energy.

At this point, choosing between Distrokid and its competitors would be a matter of choosing between quality and timing. Knowing where you stand between these two factors should have a direct correlation to your strengths as a content creator. previousDistrokid vs. United Masters: Which One is Worth Your Money?
nextLandr Mastering Review: Still the GOAT of Mastering?